Ideas - looking for chaos — all these subjects are likely to change.
After the storm, demolition site, bonfire, heaps of clothes, recycle bin.

In my exploratory sketches I drew a bonfire from different angles, at the time trying to think of the kind of brush marks that would be useful. I drew what was high up as well as what I saw at my feet,  and noted the objects shapes and where they overlapped. 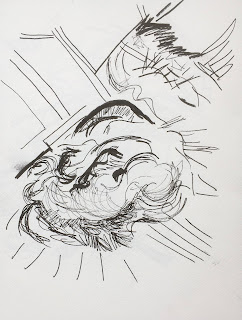 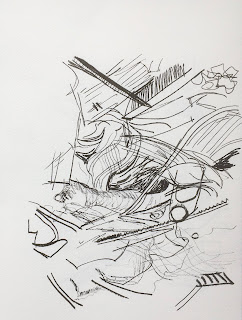 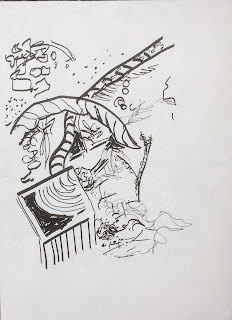 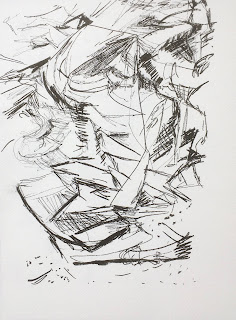 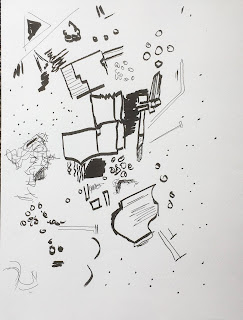 Posted by Mintasius paints at 05:04 No comments:

All the sheep fed, counted and present, but evan the 4 x 4 nearly got stuck that day! Road blocked we had to reverse out, but not before I got a picture on my i phone. A grey cold morning just after the snow storm. The photo  provided a good structure for a painting, but it needed to be brighter as I intended to turn the image into a Christmas card. This photo isn’t what I saw, the darks had lost their details and the light areas were really bleached out.
I compressed the composition to fit a stable square format, and I kept the details to the minimum. 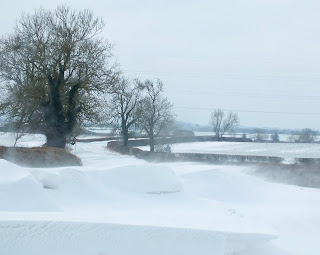 The Windsor and Newton Indanthrene blue was a new colour for me to experiment with. Initially bought for its transparent qualities to use as a glaze, but for this painting I used it directly. It is a good cold and neutral colour for winter scenes.

Trees were done in a mix of burnt sienna and indanthrene blue.

At the end of the painting process little highlights of pure white  enlivened the painting.

Soft edges Cerulean blue for the sky to contrast with hard edges of trees in the foreground, a touch of Indanthrene blue was also added to the sky to pull the land and sky together

A row of grey trees gives distance along the horizon line.

I used  the i phone to change the value of the photograph. I looked for: 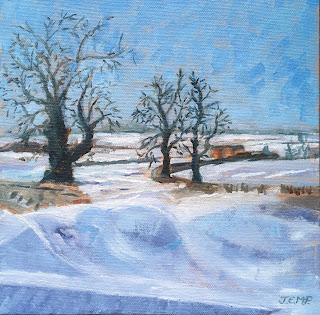 Posted by Mintasius paints at 05:37 No comments:

A birds eye view — standing on tip toes I used my phone camera to take a photograph of Forget-Me-Nots. It is interesting that these plants were planted formally and yet the colours show mingling. I thought about the spaces, rhythms and patterns of growth as I painted. Initially I wanted to use a palette knife and do an abstract study in the style of Nicolas de Stael, this didn’t work and I resorted to dotting and dabbing with a brush.

NB: each layer was thoroughly dried before applying the next layer. Working in acrylics I only had to wait an hour or so for the layers to thoroughly dry. When I did the work again in oils I had to leave a week between each layer. 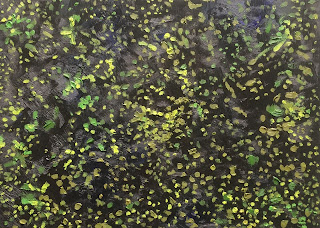 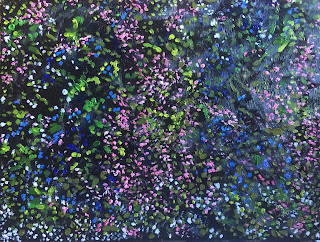 Diamin Hirst 2017 - Veil of colour paintings. He used the colours from Bonnard’s garden paintings. I used natures colours with black earth showing between. Bonnard was concerned about his legacy,

‘I should kike to present myself to young painters of the year 2000 with the wings of a butterfly.’

I am sure he would be pleased with the attention modern painters give him.
Posted by Mintasius paints at 05:33 1 comment:

As a regular member of the International Felt Makers (IFA) I got the opportunity to do a workshop with professional artist Valerie Wartelle  Valerie.lehipduhop.com . This took place at our regular venue in Arnesby.

Wool is an amazing medium and is used for practical items as well as art. Valerie took us through ideas on composition and colour, something that is very familiar to members of the HAC. She gave us with a few tips about her adaptations of a very basic technique.

The photograph is of the work I produced, and I am pleased to report it got 32 votes and sixth place for a favourite artwork at a local exhibition. I am delighted with this on a personal level but more that I feel textile art is becoming more acceptable to the public. Craft and art is one kind of discrimination that is addressed in the current exhibition Criminal ornamentation: Yinka Shonibare MBE being held at the Richard Attenborough Centre till 16 December 2018. 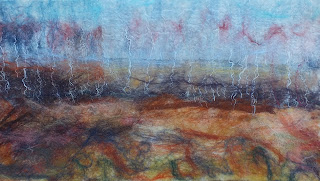 Posted by Mintasius paints at 08:46 No comments:

The haiku is to help me focus on that one moment in time, that inspiration to paint. Working towards best describes my attempts to match emotions, words and images.

Misty September
A blue, a pale blue hills rolling
At the old zebra 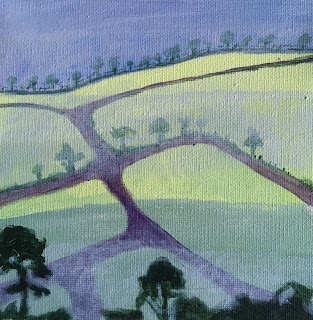 Humid aurora
A wild, mauve heather attend
near the lavender. 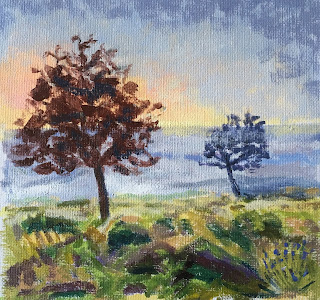 Posted by Mintasius paints at 02:33 No comments:

This time of year I always exhibit a painting with the Market Harborough Artist Cluster. This year I have been given the shop window of the 'Little big bra shop.'


I had thought about doing a lady in her underwear, but decided against it. The title of this painting is 'Warrior,' not just because she is posing in the 'Warrior yoga pose, and she is doing so whilst heavily pregnant'  but more importantly it is my statement about today's women. 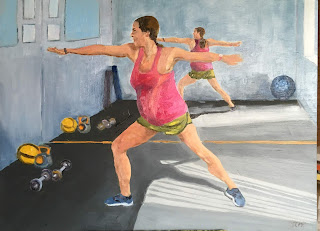 Posted by Mintasius paints at 03:44 No comments: 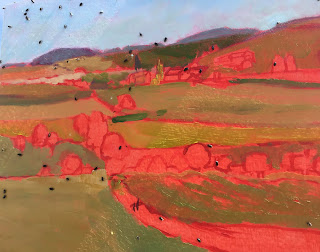 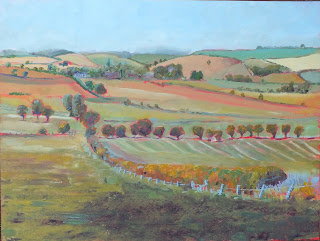 I had to abandon the plein air painting summer this year. There were so many thunder flies that met their doom by attacking my paintings.  Now autumn has arrived I am beginning to think about plein air painting again, I love being out doors interacting directly with the environment.

A selection of plein air paintings exhibited this summer at Lamport Hall. 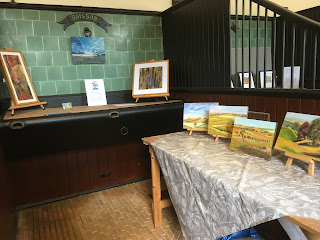 Posted by Mintasius paints at 03:34 No comments: